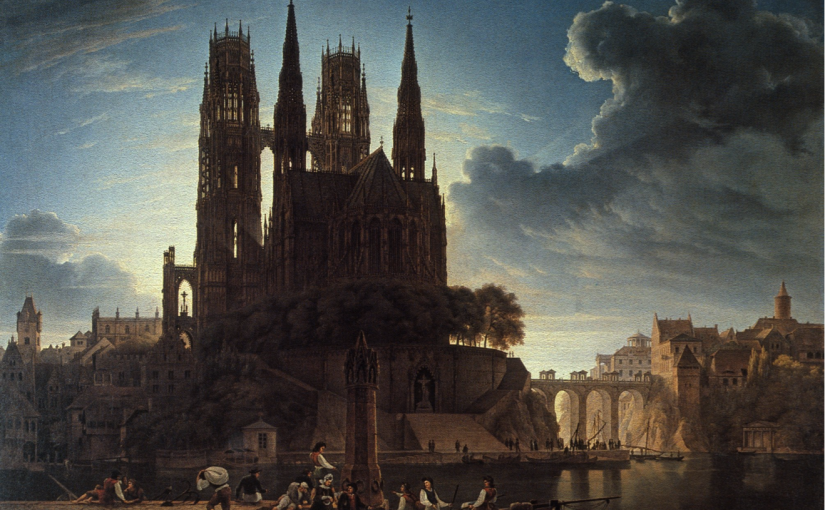 Those were beautiful, magnificent times, when Europe was a Christian land. When one common interest joined the most distant provinces of this vast spiritual empire.
– Novalis, 1799

Was Christendom ever so unified? A hundred cathedrals bear testament to Novalis’ vast spiritual empire, like the old Roman forts, marking the domain of Christ and Church.

Art itself cannot deviate from its original function, …, of glorifying religion and revealings it mysteries in a manner still more beautiful and lucid than can ever be achieved with the written word.
– Schlegel, 1804

Art, too, was predominately religious. Schlegel identifies its primary and original function as glorifying religion, using an accessible medium to encourage wonderment and devotion in its viewers and also to clarify and convey religious meaning.

Even after the Enlightenment, religion was an important theme for Romanticists, who were inspired by Novalis and Schlegel. For the Viennese-dominated Nazarene movement return to the medieval was a main theme, which included its religious imagery.

Flicking through the channels in my Salzburg hotel room, I counted nine European-based Turkish-language stations. Austria’s history is defined by its struggle against the invading Turkish empire, now its history is forgotten. For none of the young Viennese I’ve spoken to has the year 1683 registered as significant, or even the general context of those events.

And what has happened to the art?

One thought on “Christendom”